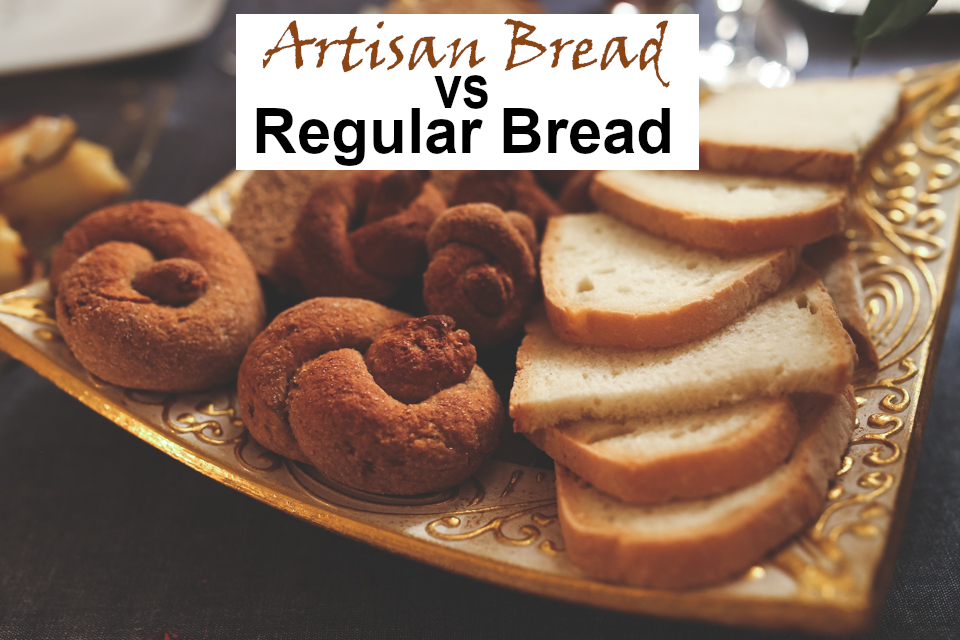 I was asked what was considered artisan bread in a conversation and I realized I didn’t have a great answer for that. We talked about it and even debated it so I decided to do some research on what makes bread artisan.

What’s the difference between artisan bread and regular bread? My research shows that artisan bread is different from regular store bought bread in one or more of the following ways. Artisan bread uses traditional methods, only uses natural ingredients, takes longer to make, can’t be made on a large scale, or is made by an artisan.

It appears that artisan bread is very vague in its definition and is somewhat open to interpretation. It is apparent that many bakeries provide a spin that helps market their bakery or shed light on why their bread is supposedly superior. I’m going to dive into each of the reasons that I’ve come across as to why artisan bread is different or even healthier from other bread. Is there any difference at all? Read and find out.

Can’t Be Made on a Large Scale (It’s Handmade)

There are artisans making bread that say the bread isn’t artisan bread if it is made on a large scale or it isn’t handmade. Kneading the dough is obviously an important part of making any bread and there are many claims by small artisan bakeries that say the dough has to be kneaded by hand to be considered artisan. However, I was able to find other artisan bakeries that say, that it doesn’t matter if it’s a hands-on process because “there are very few artisan bakers who have not embraced the time and energy-saving potential of technology.” We all know of plenty of “artisan” breads that are made on a large scale and are not handmade. No one can or will put a number on it and no one can define what limited quantity or large scale is. This claim to separate artisan bread from regular bread seems to be the weakest differentiator of all the claims that I found.

In my research I stumbled upon several references to ingredients when talking about artisan bread. Some claim that artisan bread is made with only four ingredients of flour, salt, water, and yeast. One bakery says that the type of flour that is used is what makes a bread artisan verses flour that is used in all other bread. The silly part of that claim is that they don’t even bother to tell what type of flour is what makes artisan bread different than regular bread so it left me still wondering what type of flour that would be. I know some claim that bread flour is a must an others say it needs to be a flour with more grain and others say that white flour is just fine.

The most common claim under the heading of natural ingredients separating artisan bread from regular bread is that artisan bread doesn’t use chemicals. When you hear about chemicals in food it freaks people out. When I read this at first I too had this reaction but as I thought about it more and combined it with some research we’d done on lecithin and dough enhancers, the more I realized that it is a bit of a scare tactic. You see, all bread has a chemical reaction. The leavening or rising of the dough is the yeast letting off a carbon dioxide gas that is trapped in the dough. The flour has gluten in it that essentially feeds the yeast and helps create the gas. Fermentation is really a chemical process. One claim said, “Like centuries ago, these breads didn’t need chemicals to make them great and they still don’t today.” However, bread always uses a chemical reaction. It did then and it does today. One artisan bakery knew this when they said that artisans are the ones that “incorporate the science behind the chemical reactions of the ingredients.” Emulsifiers such as lecithin are not harsh chemicals, they just join two things together that don’t want to be. That is done at a chemical level, but it isn’t a harsh chemical. In fact, one quote says that the lack of chemicals, “[allows] the natural enzymes to react with the flour.” I find it silly that they claim it is lacking chemicals but in the same sentence say that the enzymes are “reacting” as if that isn’t a chemical process.

One assertion for separating Artisan bread from store bought bread is that artisan bread takes much longer. The fermentation process is mentioned the most. A longer fermentation process should last up to 24 hours with the idea that it adds flavor and texture to the bread. Of course mass-produced bread isn’t usually allowed to rise that long because they typically use “chemicals” and mixers to speed up the fermentation. As I mentioned earlier, chemicals are a scare tactic. Many of the chemicals they are talking about that can speed up fermentation are gluten, ascorbic acid (also known as vitamin C), lecithin, ginger, etc. that are mentioned in an earlier article that we wrote on “How to Make Homemade Bread Less Dense or More Light & Fluffy.” Sure, they speed up and improve the fermentation process but why would that make a difference in whether it is called artisan or commercial bread? I’m not saying that bread that rises longer doesn’t taste good but in the same sense I think it would be short sighted to say that bread that rises fast doesn’t taste good too. Depending on the recipe, each kind, long rise and quick rise,  can and does taste good or bad. I don’t think you can just make a blanket statement like many artisan bakeries do that says quick rising bread is unflavorful because I’ve had some amazing bread that didn’t take 24 hours to rise.

It is Made by an Artisan

It would logically make sense for artisan bread to be made by an artisan. This seems like it would make a clear distinction from other breads. An artisan is defined by Merriam-Webster as “1) A worker who practices a trade or handicraft: craftsperson -> a skilled artisan 2) A person or company that produces something (such as cheese or wine) in limited quantities often using traditional methods —often used before another noun -> artisan breads.” After reading the definition, it is a pretty vague distinction of who would be considered an artisan when referring to bread. If someone is at home practicing making bread, or makes bread often, then they could be be considered an artisan bread maker. The second definition may be even more confusing. As I discussed above, who defines what a “traditional method” is? Now the definition throws in that it should be in limited quantities. What is considered limited? Obviously, there are plenty of baking companies marketing artisan bread that mass produce it just like regular bread. At what point would it be considered to be above the limited quantity to no longer be artisan bread and now be considered regular bread.

So what’s the difference between artisan bread and regular bread? It is my honest opinion that there is no clearly defined difference. In fact, I think it is a marketing buzzword to try and lift one bakery above any other bakery. Maybe Wikipedia says it best when it says, “Thus, “artisanal” is sometimes used in marketing and advertising as a buzzword to describe or imply some relation with the crafting of handmade food products, such as bread, beverages, or cheese.” Really anyone that bakes bread can ultimately claim to be an artisan bakery because there is no clear definition out there. As I’ve shown, there are plenty of differentiators that people claim but those claims are unique to each bakery. The bottom line is that you should choose your bread based on flavor and much less on whether it is artisan or regular bread.

What is Meant by Rustic Bread? Although a little vague like artisan bread, the general consensus is that rustic bread is not shaped with a pan and it is only made with simple ingredients such as just flour, water, salt, and yeast (or starter). Rustic bread is usually baked at a higher temperature which results in a thicker crust.

Is Artisan Bread Healthier than White Bread? There have been studies showing that artisan bread (defined in the study as “bread that is produced using traditional methods and ingredients”) showed no difference nutritionally and the bread showed individual results. Some people reacted differently to each type of bread but it wasn’t consistent with which bread it was.